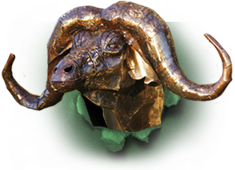 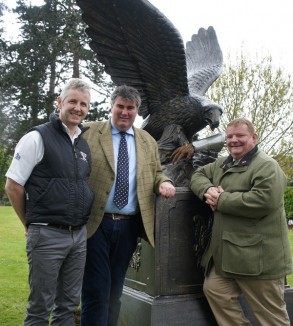 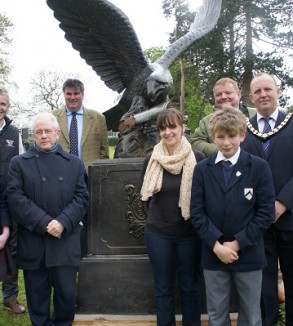 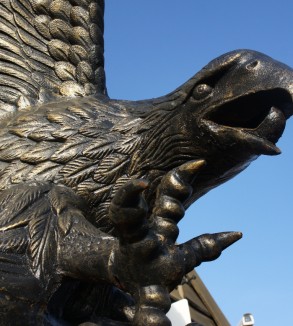 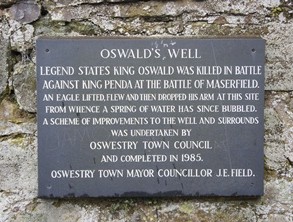 The British ironworks Centre has joined forces with local councillors and Oswestry School, to provide a proposal for a  wonderful and lasting memorial to the memory of King Oswald, the Christian king who bravely fought the pagan king, Penda,  in the battle of Maserfield in 642.

King Oswald, who was defeated in battle, supposedly had one of his arms taken by a huge eagle, who, took it to a nearby tree where it fell to the ground and was said to have caused a natural spring to form.

The well, who’s location is next to Oswestry school, is being honoured, by the magnificent sculpture, which has been provided by the British Ironworks centre, in Oswestry.   Weighing in at nearly two tonnes of cast iron  and standing on its own plinth at nearly nine feet tall, it is simply stunning to look at, and it is hoped it will eventually be included in the nature and safari trail around the town, later this year.

At the moment the eagle is being worked on by well known local sculptor, Jeremy Schrecker, who is hoping to add a gauntlet to the eagle’s talon, to represent the arm of king Oswald, that was removed during the battle.

Mr Rob Douglas, Head of Oswestry School, has expressed a keen interest on behalf of the students who would like to assist in the siting, maintenance and care of the eagle.

It is hoped that this coming together of the British Ironworks centre, with local schools, town councillors and local artists and sculptors, will help to promote a greater sense of pride in the community, and give a healthy, much needed boost to local tourism trade.

The British Ironworks centre would like to hear from any artisans, ground workers or historians , that would like to contribute time , resources or advice, in preparing any of the projects being proposed.